Today, after getting about 6 hours of good sleep, and having a big breakfast of bun bo hue (sounds like boon boh hway, another noodle and meat soup), one of the Quang’s sons showed me how to get on-line. I will be able to make postings to the blog easily from their home. Just another sign of their hospitality.

We were invited to Mr. Chin’s house for lunch. He, Mr. Chin, met Fr. Binh during his visits to Portland. Two of his 8 children live in Portland, the rest in Vietnam. Mr. Chin is one of the men who met us at the airport (see photo). A very delightful and friendly soul. He loves to practice the little English he knows and lets out a big laugh every time he says an English sentence. “This is my sis-ter. HA- HA- HA- HA- HA!” He is fun to be around. One of his granddaughters, Tien, speaks English quite well. She is in her last year of Pharmacy School and works part-time as a hostess at an events planning firm where she gets to meet entrepreneurs from many countries. English is the universal language. She visited with me while everyone else visited in Vietnamese. She was quite helpful and informative. She got her laugh from her grandfather.

The mode of transportation to lunch – and also later in the day when we went to a travel agency to book a 4 day trip to Cambodia (Feb. 7-10) – is the ubiquitous motorcycle, which is more like a scooter. There are thousands of them on the streets. Of course I didn’t drive, but riding on the back is like watching a videogame, dodging in and out of traffic. There is a fairly new helmet law, but there don’t seem to be any other regulations. A single lane will have as many scooters as can fit across. When there is no more room they go up on the sidewalk. All kinds of cargo and up to 4 people can fit on a scooter, although most had just one or two people. There is also a little chair that can go in front of the driver so that a toddler can sit there, gripping the handle bars. Though my face may had a look of terror and alarm at first, everyone else looked quite relaxed as they moved in and out of traffic missing cars, trucks, busses and other scooters with just inches to spare. Within a few miles it became fun as I remembered that the driver, one of our hosts, was just as interested in preserving his own life as mine. 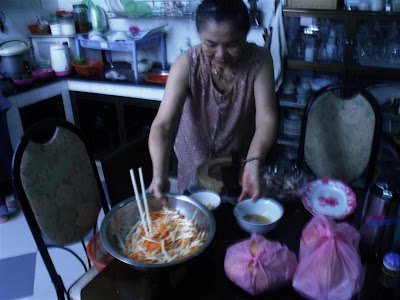 Mrs. Chin, married well over 50 years and who just returned from a pilgrimage to the Holy Land, prepares the salad. 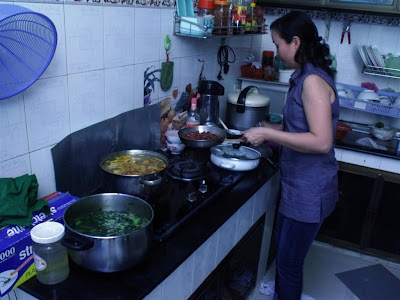 Mr. Chin’s daughter in law prepares a portion of lunch at the kitchen sink. 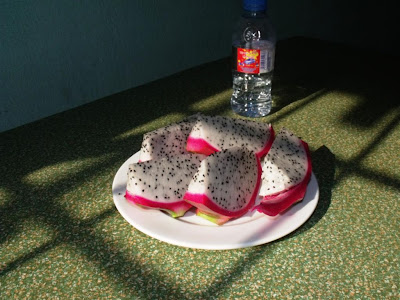 There are many tropical fruits that we have eaten in the first day, all of which are new to me, and most just happen to be in season. Here is a plate of cut up thang long, which is sweet with a medium hard shell.
Posted by Bridget Becker at 7:17 AM