Today is Sunday and we will go to an afternoon Mass. But in the morning I was able to visit two charities. The first one was a school for the blind that is operated under the auspices of the Salesians. I noticed this immediately for there was a large statue of St. John Bosco near the entrance. This was important to me because the priests with whom the St. Juan Diego youth group worked in Tijuana in the Los Embajadores program were also Salesians, founded by St. John Bosco. Don Bosco (as he is affectionately called) was known for his dedication to children, especially the poor. He is an Italian saint (1815-1888) and was known for his service for poor children. There are Salesian programs for children everywhere in the world. I remember seeing a Salesian School in Krakow during my vacation there. Interestingly enough, his feast day is tomorrow, January 31!

Phong (Mr. Quang’s second son) took me to the school which has 30 live-in students. The second thing I noticed (after Don Bosco’s statue) was the impressive number of medals from participation of students in the Paralympics (the Olympics for disabled children).

One of the teachers, Troung, gave us a tour. He, himself, was a student at this school and is now back to teach the elementary students in various subjects, including English. He was all but fluent in English.

Troung had one of the students, Vinh, show me how she could read and say aloud the words from her English vocabulary textbook in Braille. They also showed us their computers with special software that “speaks” the letters as one types (in English or Vietnamese). The computer can read back what one just wrote. There was a music room with many instruments to choose from. In the kitchen and dining areas Troung explained that the children do many of the chores around the house and for meal preparation and clean up. I told him that this was just like my family growing up. That is how we learned responsibility. He laughed when I told him that I didn’t really want to learn responsibility at that age.

They also have a room for teaching Japanese massage, complete with life-sized models of the human body to learn pressure points. This can become a trade and livelihood for the graduates.

Another nice feature was that there were Braille numbers for each floor on the stairway banisters at each landinịg. They also have elevators for students who are in wheelchairs. I had noticed that there were no elevators in the other charities I had visited thus far.

The next place we visited was a home for disabled adults. There was a Franciscan priest who happened to be there who had been ordained only six months! It seemed that he visits that house on a regular basis.

In both these locations, most of the students were away for the Tết holiday to visit their families in various parts of southern Vietnam.

The high point of the day for me was to concelebrate with Mrs. Quang’s uncle at the parish church. He is elderly and doesn’t speak English. I had thought I was going to sit with the family for Mass, but Mr. Quang motioned to me, just before we left and made it clear that I will have to say something during the Mass: Anh chị em hãy chúc bình an cho nhau. – Let us offer each other the sign of peace. Then I realized that I would be concelebrating. Fr. Binh had told me to bring my own alb on this trip because none of the churches would have an alb long enough for me. So I ran upstairs and grabbed my alb. Then Mr. & Mrs. Quang and their daughter Ngoc kept repeating the line to me until I got it right.

When we got to the church we went first to the rectory to greet the pastor and thank him for letting me concelebrate. Then we went to the sacristy and waited. The servers came in who knew a few greetings in English, then a sacristan picked out the longest green chasuble he could find. When the elderly priest entered we greeted each other in Vietnamese and we got vested and lined up for the procession. It was then that I realized that I needed to know how to say “The body of Christ.” for communion. Fortunately, I had a copy of the Mass in Vietnamese in one column and English in the other. Ngoc had helped me find it on the internet and then printed it out for me. I pointed to those words and asked the servers how to pronounce them: Mình Thánh Chúa Kitô. Then many times through the Mass I kept repeating to myself: Mình Thánh Chúa Kitô, Mình Thánh Chúa Kitô…

In the end I got through all my parts. But what made the greatest impression upon me was the chanting of the Vietnamese Mass. You see, the language is tonal, so it lends itself very easily to chant and the communal prayers, the Confetior, the Creed, the Lord’s Prayer, are all chanted. It is a remarkable sound and draws one into the mystery of it all. As we all said at the end of Mass: Tạ ơn Chúa – Thanks be to God! 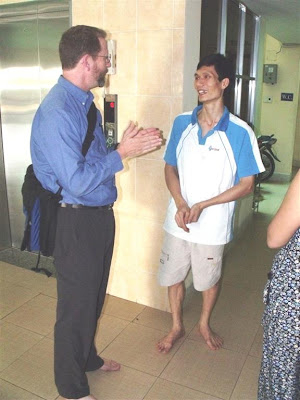 Troug gave us a tour of the Salesian School for the Blind. He was a student there himself, went to university and is now back to teach elementary students in all subjects including English. 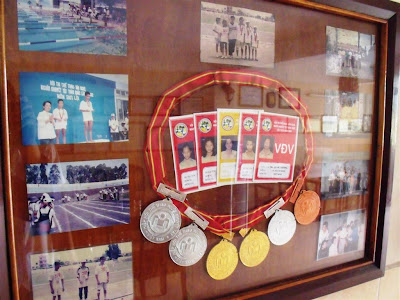 Students from this school participated and won events in the Paralympics held in various parts of Asia. 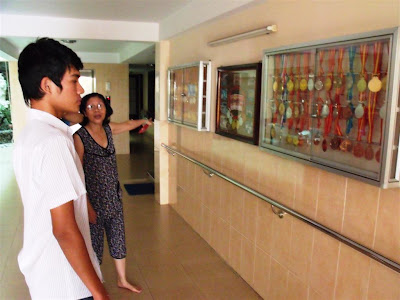 My driver, Phoug, is shown an impressive array of Paralympics’ medals. 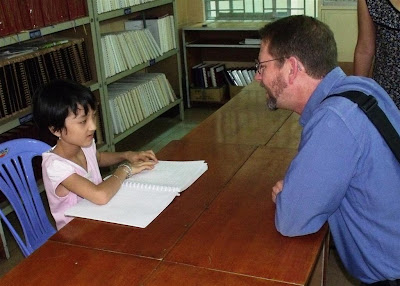 Vinh, one of the students, shows me how she can read in Braille from her English vocabulary book. Her English pronunciation was excellent. 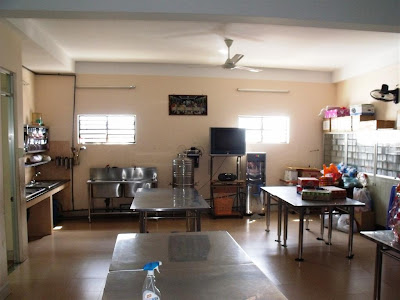 The dining hall where the students take their meals. 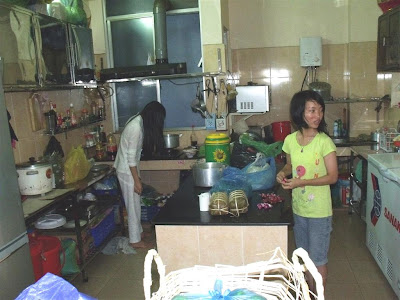 Troung’s sister (on the left) was on break from the university (Schools are out for a month for the Lunar New Year) and is helping prepare lunch. She spoke a beginner’s English. 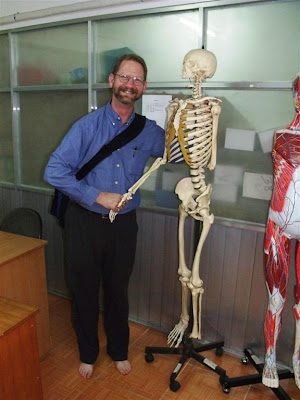 A life-sized skeleton, whose acquaintance I was pleased to make, is used in the massage room to teach pressure points for Japanese Massage. A skill which can lead to jobs for graduates from this school.
Posted by Bridget Becker at 7:22 AM