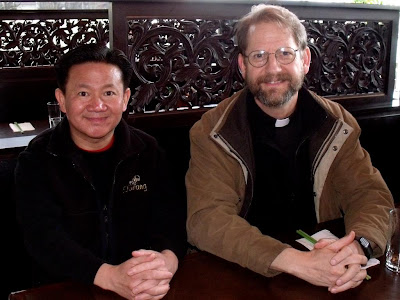 Ever since I saw the 1993 Oliver Stone film Heaven & Earth I have desired to go to Vietnam. The movie showcased the natural beauty of that country and told the story of a nation torn apart by war. It is about a courageous Vietnamese woman’s family from before the war, through survival during the war, her marriage to an American soldier, and to her coming to the United States.

Over the years I have met many Vietnamese, mostly Catholics, and have been inspired by the stories of how they came to this country. In this archdiocese we have many devout Vietnamese lay Catholics, religious sisters and priests. One of my friends, Fr. Peter Binh Hoang, has asked me on numerous occasions to go with him to Vietnam to see his country and the charity work that he supports. He is the pastor of St. Stephen Parish in Portland as well as chaplain for the Southeast Asian Relief Association (SARA – website sara-hope.org).

Fr. Binh was 16, growing up in Vietnam, when his mother woke him in the middle of the night and said: “Go with your uncle and do whatever he tells you.” Leaving her behind, they made their way to a boat full of other political refugees and, after a lengthy ordeal and refugee camps, came to this country. Eventually, his mother joined him and his brothers here in Portland.

We leave January 24 and return February 24. Half the time will be touring (including Cambodia) and the other half doing charity work with SARA. Marty Quandt, of St. Juan Diego Parish, will join us for one week starting on January 31. We will celebrate the Vietnamese New Year “Tet Nguyen Dan” on February 3, and visit Fr. Binh’s hometown of Da Nang. We will visit the shrine of Our Lady of La Vang where, at the end of the 18th Century, the Mother of our Lord appeared and provided healing and strength for the Catholics of Vietnam who were experiencing severe persecution. We will visit hospitals and orphanages run by SARA, and some leper colonies run by the communist government, where some of the care is provided by volunteer organizations like SARA. The Vietnamese woman, Kim Dung, who founded SARA, lives in Portland and will be there in Vietnam during our stay.

I have a feeling this will be one of those life changing trips. Please pray for a safe journey. It helps that I already love Vietnamese food!

Your brother in Christ,