Last evening my hosts, the Quang family, threw an anniversary party celebrating one year since… well, I’m not really sure what they were celebrating because Fr. Binh is away for a few days so I was left to communicate with my hosts whose children only speak little English, but enough to get by. At the party I was told that it was a one year anniversary, but of what I don’t know, it didn’t translate. I do know that all present were part of the area church group of which Mr. Quang is the head. If you took the combined English vocabulary of all who were present for the party one could have filled almost a whole page of a dictionary. But that didn’t stop us from communicating.

The evening started quite slowly. As each person showed up we exchanged pleasantries. Those who knew a sentence or two in English – “How long are you here?” – would ask those questions and we would be done. Then, to be polite, no one felt comfortable launching into a conversation in Vietnamese since I, the priest and guest, to whom they wanted to show respect, would be excluded. So there we sat in silence, me feeling bad that I might be the demise of the party. One of Mr. Quang’s sons, Phong, did his best to translate a few things, but it was a lot to ask of him.

After about 15 minutes they asked if I would wait while they conducted their meeting. They opened with a prayer, then, from what I could tell, there were a few speeches and applause, then concerns about this or that were expressed, then they closed with a prayer and adjourned for dinner. And what a meal it was with Mrs. Quang’s homemade wine! Once they taught me how to toast in Vietnamese: mot, hai, ba YO! (One, two three CHEERS!), we were underway. I ended up sitting next to a man who used to serve as an interpreter for the American military police up until 1975. He had not spoken much English in 36 years, but it slowly started coming back. It seemed that the more we toasted, the more English everyone remembered. By the end of the evening we were singing songs to each other, and clapping, and having a grand old time. I was invited to numerous houses, depending on Fr. Binh’s and my availability in the coming weeks.

Today I walked to a new neighborhood restaurant with Phu and Ngoc (the Quang’s oldest son, and their daughter) for a breakfast of Pho. Pho (Fuh – A soup with choice of meat and broth with flat noodles and a fresh greens garnish) seems to be served for breakfast, lunch and dinner. Afterwards I went to a different orphanage and then to visit the Cathedral, Nha Tho Duc Ba (Holy Lady Church).

Today Phu was to be my guide. On the way to the orphanage he took a wrong turn.
After a while he said: “I think we are going the wrong way on a one-way street.” Honestly, I couldn’t tell, and I wondered what difference it made since we weren’t the only ones. Anyone who has seen the motorcycle traffic in Saigon will agree with my wonderment at the apparent randomness of traffic patterns.

Eventually, we arrived safely at the orphanage and before we could get off the motorcycle the children were surrounding us, hugging us, saying “Hello” and taking our hands. There are 58 children under the care of three religious sisters and some helpers. Most arrive as infants because their parents have no fiscal means of caring for them. One baby was just three months old. The older children (pre-teens?) were helping to feed some of the babies.

One little boy, about 4, handed me a little stuffed frog key fob. I looked at it approvingly and gave it back, but he pushed my hands away and pointed to me that he clearly wanted me to keep it as his gift. I smiled and said Cam on (Thank you) and he jumped for joy and ran around in circles. He could not contain his delight. This little guy has nothing, he has no parents, he has to share with 57 other kids the attention of three religios sisters (and some helpers that we saw), and he wants to give me something. Yes, I eventually did give the sisters a red envelope (Lucky Money) containing a portion of what our Oregon parishes donated, but this little fella was adamant that he give me, a total stranger, something of his. Amazing.

One of the sisters gave us a tour. Their facilities were recently upgraded, some parts as recently as days before our arrival. Their library was stellar (even had “Harry Potter” books!). A sign in that room read in Vietnamese and English: Library of Hope. Great care is being offered and I was happy that we could contribute to that.

Again, the children wanted to sing for us. Someone told me that Vietnamese people just LOVE to sing. The two songs the children knew in English were: “If Your Happy and You Know It” (apparently a standard) and “One Little, Two Little, Three Little Indians”, a song which has probably drifted from favor in the USA but is still popular at this orphanage.

I gave our churches’ gift to the sisters and we said our good byes. I mentioned to Phu as we drove away that it is delightful and fulfilling to be able to deliver these gifts and get a great reception, but the real heroes are the sisters and all the workers at the orphanage who provide hope for these children at great personal sacrifice.

The neo-gothic Cathedral of Saigon, dedicated to Our Lady, was built in 1880. A huge statue of Mary, erected in 1959 in front of the church, has her holding a globe and is entitled Regina Pacis, Ora pro nobis (Queen of Peace, pray for us – someone may correct me on my Latin). In 1959 there was a great need for peace for a war was looming that caused untold suffering.

I took Phu to lunch at “Pho 24”, a global chain of Vietnamese restaurants, we went by the travel agency to pick up a few items for the Trip that Fr. Binh and I are taking to Cambodia, and we went home. 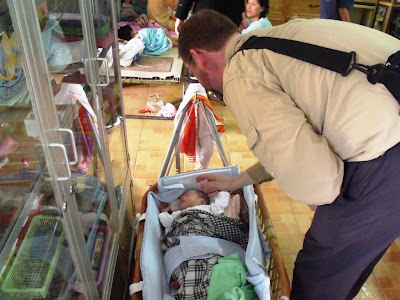 Blessing a three-month-old baby at the orphanage. 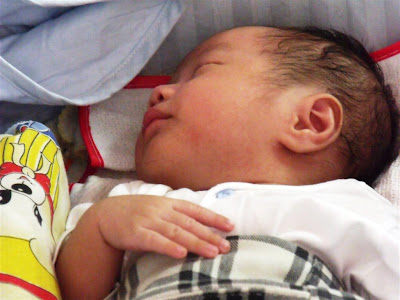 A child so beautiful, peaceful and fortunate to be in the care of the sisters. 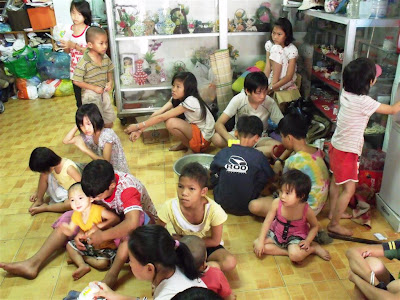 Some of the children who greeted us. 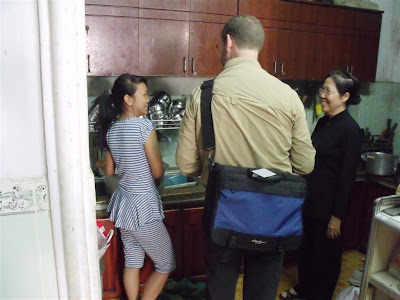 This older girl got to practice some of her English with me while she helped to prepare lunch. 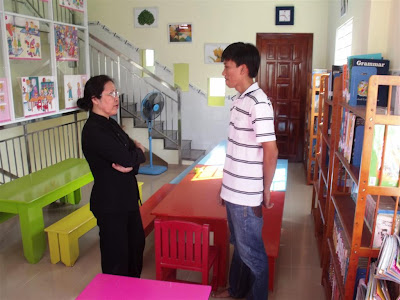 One of the sisters telling Phu about the library. 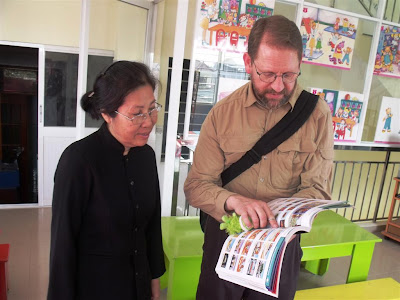 This picture book is a great tool for teaching the children English and Vietnamese. In my right hand is the stuffed frog key fob that was given to me by one of the children. 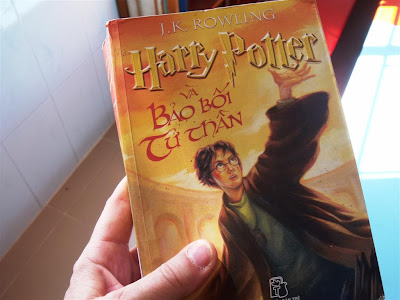 Harry Potter is Popular in Vietnam, too! 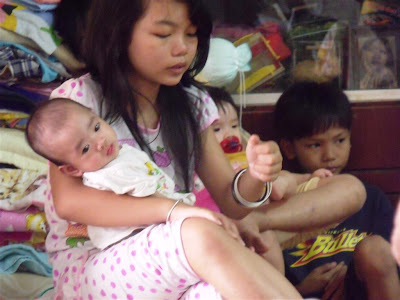 Some of the older children help feed and care for the babies. 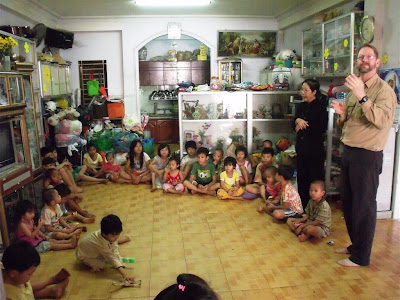 The children all sang and I gave a contribution to this orphanage. I have learned to remove my sandals when entering a house. 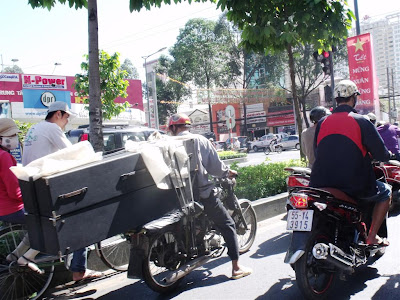 What people will transport on a motorcycle! 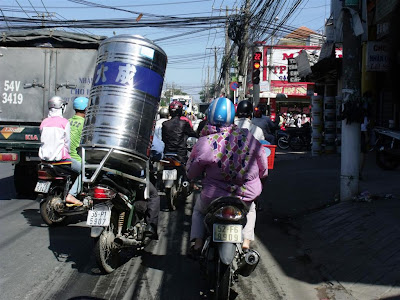 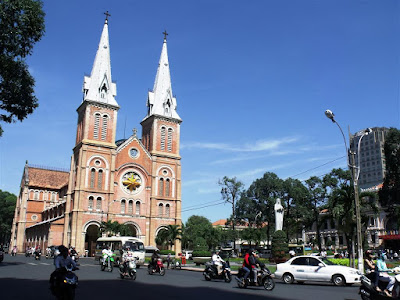