School for the Blind

We went out for breakfast this morning to a neighboring restaurant owned by Catholics (in fact most of the businesses we have entered have a large crucifix on display or an image of Mary). Our host, Mr. Quang is a leader of one of the area groups in his parish of 26,000 members (yes, that’s 3 zeros!) So he knows lots of people and patronizes their businesses. Breakfast consisted of rice crepes with ground seasoned meat in them, chopped into 2 inch lengths and piled with vegetables like bean sprouts. Twice I received compliments on how well I do with chopsticks. It helped to have gone to lunch with Fr. Binh a few times at Vietnamese Restaurants to plan this trip.

Then we got on the scooters again and made visits all day to the charities Fr. Binh had told me about. We made two stops, first to an orphanage for blind children, and then to the motherhouse of the Sisters Adorers of the Holy Cross of Thu Thiem who have a community in Beaverton.

The children at the orphanage were amazing. There are 28 students on site. The religious sisters who run the orphanage had the children demonstrate some of their activities: Braille class, arts and crafts where they create products that are sold to support the orphanage, and, most delightfully they put on an impromptu concert of songs they had composed and recorded (I even got a DVD with some of the songs and videos!). They sang a song about the experience of blindness that leads to hope, and a song about feeling alone and finding God, a song for a happy (Lunar) New Year song, and one song in English. (They could all say, “Pleased to meet you!” with gusto!) Then we gave our greetings and gift, thanks to donations from parishioners of St. Stephen and St. Juan Diego parishes. Fr. Binh asked me to sing a couple songs (Prayer of St. Francis and Ave Maria in chant form). They were very receptive.

Next we went to visit the beautiful motherhouse of the Sisters Adorers of the Holy Cross of Thu Thiem. The grounds were beautiful. The community has about 400 sisters and additionally 200 in formation. They serve in parishes in the Archdiocese as Catechists and service to the poor. The Superior General of the order, Sr. Thao greeted us along with Sr. Thu who has just returned from New Jersey having studied theology there. They offered us coconuts that had straws in them for us to drink the milk from. They support them selves by selling the tropical fruit from trees on their property, making incense charcoal, wine, milk cows, and making liturgical vestments. Fr. Binh and I both bought albs and chasubles. These women work hard and, of course, integrate their work lives with prayer. Their beautiful grounds and buildings were centered on their chapel and a “mountain” that replicates the mountains in Vietnam. As one climbs the “mountain” on steps and path, the stations of the cross are displayed in metal plates of bronze relief. Behind the plates are the niches where they place the cremated remains of their deceased sisters. They came up on this plan to preserve land (Sustainablity, although they did not use that word) and to keep their departed community members in the center of their communal life.

We gave them three gifts in red envelopes (also called “lucky money” which is commonly given during the Lunar New Year) to help the poor children and the elderly sisters that the community cares for. This was, again, given through the generosity of our parishes.

We went home after a 40 minute ride on the back of a scooter, feeling exhausted from the heat and a cold I’m fighting. We went to the 5:30 Mass at the local parish and had dinner with the Quang family after that. I went to bed early and missed a posting that day to the blog. So you may be getting two days worth in one shot. 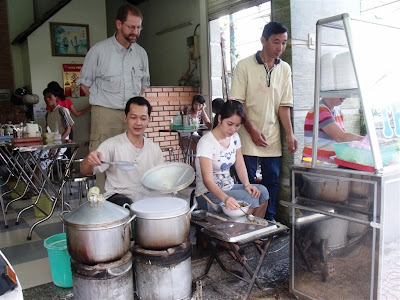 This is how they make rice crepes. Pour rice batter on a screen over steaming water till it takes form, using a chopstick place the crepe on table where it can be filled with meat and rolled, and voila! 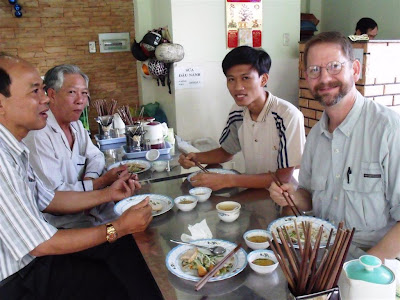 Our host, Mr. Quang and one of his sons took us to breakfast at a corner restaurant where we met the owner. 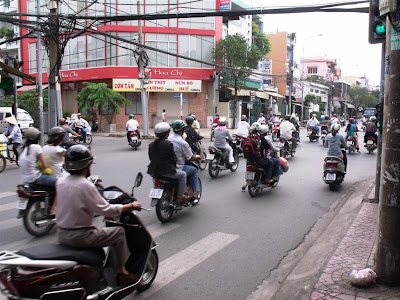 Normal traffic in the neighborhood where we are staying. Notice the complexity of powerlines. 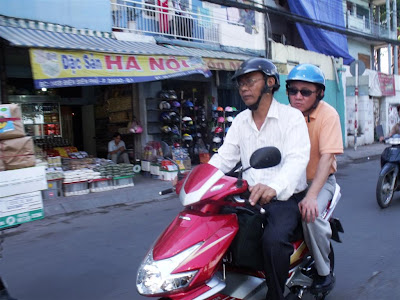 Fr. Binh rides on the back of Mr. Quang’s motorcycle. I had my camera strapped tightly to my body as I just pointed, not looking through the viewfinder, and kept clicking knowing that a few shots would turn out okay. 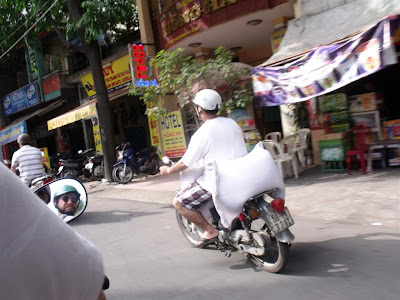 Motorcycles are also a primary means of transporting goods. Who is that in the rear view mirror? 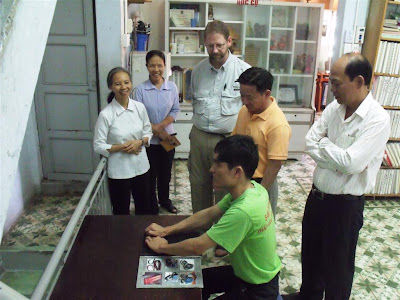 At the Orphanage for the Blind one of the students (apparently the “Big Man on Campus”), shows us how quickly he can write in Braille. Very impressive. 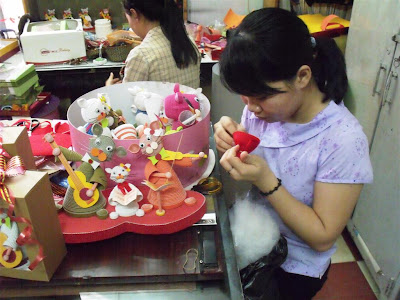 One of the students works on paper crafts and creates darling statues of animals that are sold to support the school. 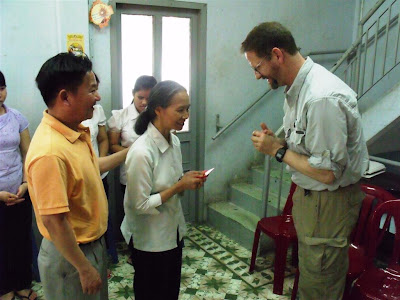 Giving the gift of “Lucky Money” in a red envelop. Kathy Yee wisely sent a few along with me so that I could use them to give your contributions to the various charities we will be visiting. 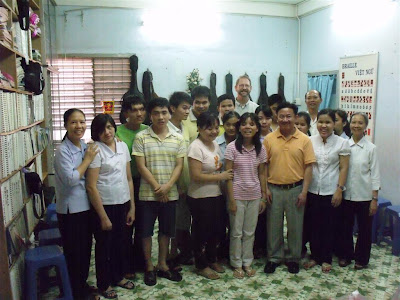 After the children sang for us and we gave and received gifts, we stood for a group photo. 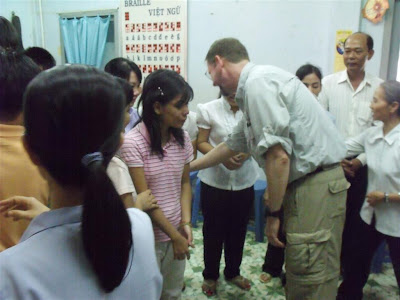 Saying goodbye to the children. 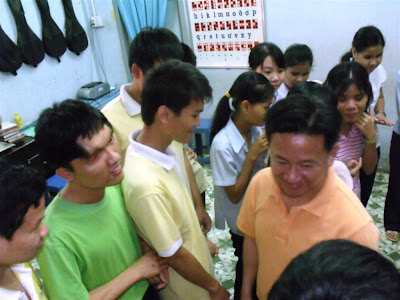 It was delightful for me to watch Fr. Binh as he greeted everyone with his great reverence for those who operate the orphanage as well as the students. 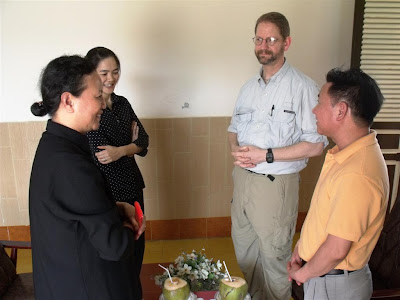 At the Motherhouse of the Sisters Adorers of the Holy Cross of Thu Thiem we met the General of the Order, Sr. Thao and Sr. Thu who just returned from studying Theology in New Jersey. For hospitality they greeted us with coconuts as seen on the table. 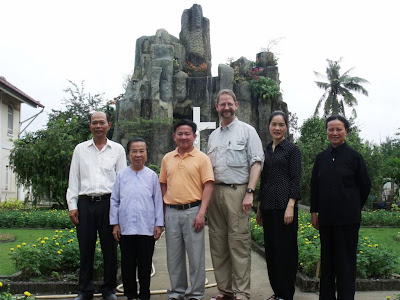 We are standing in front of the community mausoleum, shaped like a mountain. On the back side there is a path to the top lined with the stations of the cross. 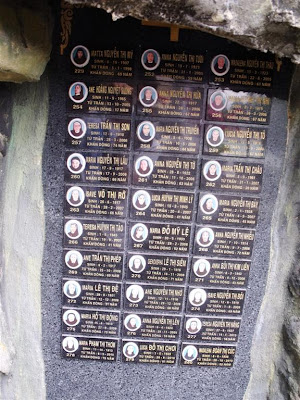 Pictures and names of the sisters entombed in the mausoleum. 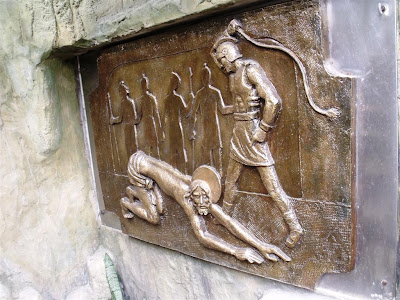 One of the stations of the cross in the mausoleum “mountain”. The plaque can be removed to expose the niches in which the deceased sisters’ cremated remains are entombed. 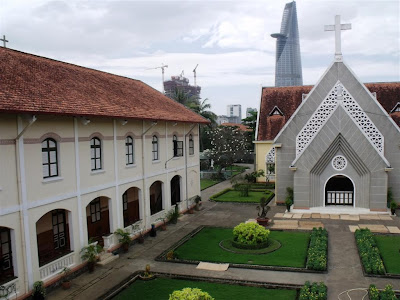 The view from the top of the mausoleum looking toward the church and downtown Saigon where the highest skyscraper in Vietnam looms large. 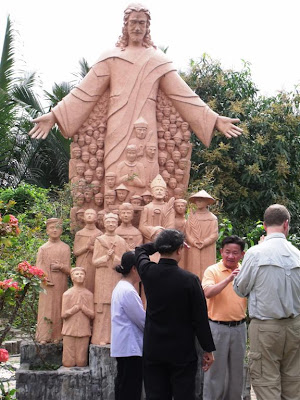 This composite statue of the Vietnamese Martyrs was sculpted by Sr. Thau,
the General of the Order. 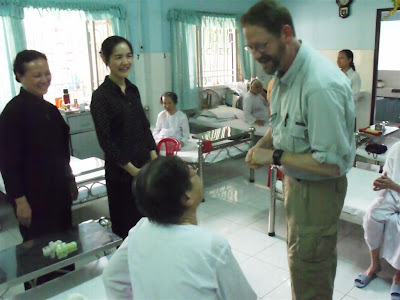 We visited the infirmary for the elderly sisters. I heard a loud “Bonjour!” and turned to see this woman who was the previous General of the Order. I put my high school French to use and introduced myself and Fr. Binh. Many elderly Vietnamese speak French which was mandatory in the schools at one time. Now that is the case for English. 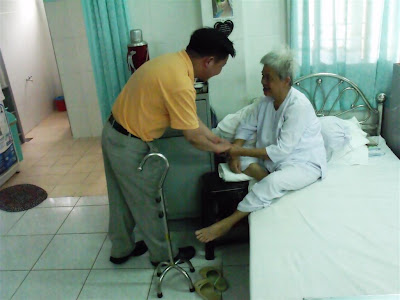 Fr. Binh visits with one of the elderly sisters. 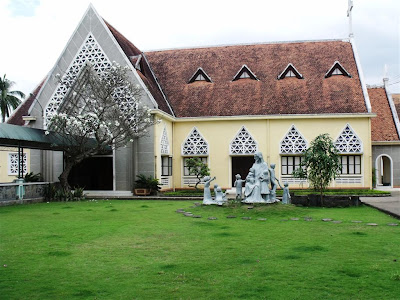 A view of the community chapel and a statue of Jesus and the Children,
also sculpted by Sr. Thau. 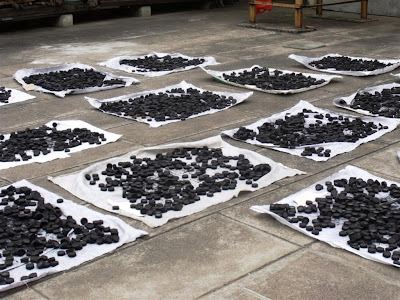 The sisters make charcoal for incense that they sell to churches to support the community. 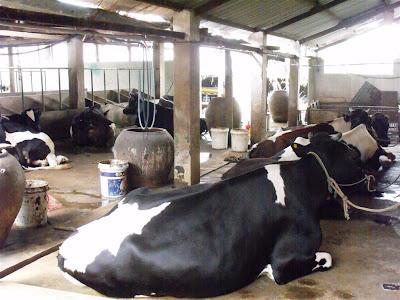 Another means of financial support are milk cows. The sister in charge of the cows has had that role for 20 years. 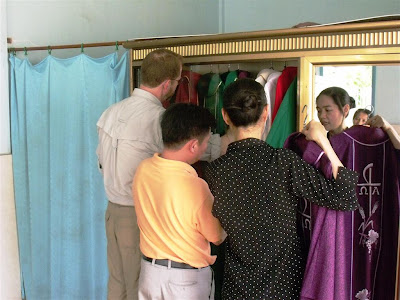 Fr. Binh and I do a little shopping. These hand embroidered vestments are made right here by members of the community. Their prices were quite reasonable: $85 for a chasuble, $50 for an alb, both of which are tailor made (we were even measured). But Fr. Binh told me, “But we will give them $100 for each.” Another reminder to me that we can afford many things in the United States which are well beyond the reach of most Vietnamese. Therefore, in justice, we should pay more.
Posted by Bridget Becker at 7:56 PM