Tuesday morning started by concelebrating 5:30am Mass at the Saigon convent of the Sisters of Our Lady of Unity (of Bắc Ninh), Sr. May’s community. After breakfast we drove for six hours southwest of Saigon, across the Mekong River to the Province of Kiên Giang and the town of Kenh 7. That is where Fr. Thinh, an amazing man, operates a parish, a free clinic for the poor (that is a collaborative effort of five different religious groups), and a small orphanage.

The clinic specializes in Eastern medicines and treatments (which we would call supplementary or alternative) that involve herbal remedies and acupuncture. One of our reasons for making this trip was to deliver gifts from SARA. But another reason was to deliver Sr. May, meaning that we introduced her to the pastor who would oversee her studies of the healing arts there for the next 3 months to a year. I believe it is the plan for her to bring those skills back to the clinic her community operates (funded by SARA) in Bắc Ninh, in the North.

We toured the grounds and activities, which are abundant. Then we had dinner, after which we were treated to an impromptu talent show that Fr. Thinh called into action earlier in the day. It was amazing and fun.

The next morning we had to rise early (again!) for Mass at 4:45am. There were men women and children, four priests and three altar servers for this middle-of-the-week Mass. The church was almost full. I continue to be amazed at the devotion of these Vietnamese Catholics.

We drove back to Saigon, after stopping by the parents of Quang (our Saigon host) who live in the area. The Quang family hosted us for a last Vietnamese supper and then we made our way to the airport and, eventually, Oregon. It has been an incredible month, but I do miss the comforts of my own home. I really miss the parish and my family. But I am grateful for all God has shown me of his amazing people in Vietnam. 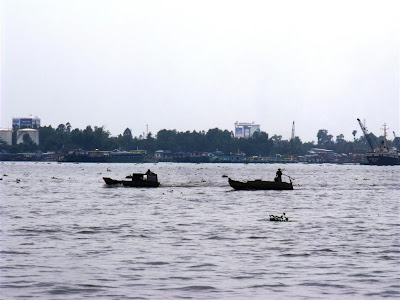 Boats of all sizes fill the Mekong River. There doesn’t seem to be any rhyme or reason as to traffic patters. All kinds of small boats hurried across the path of the ferry. 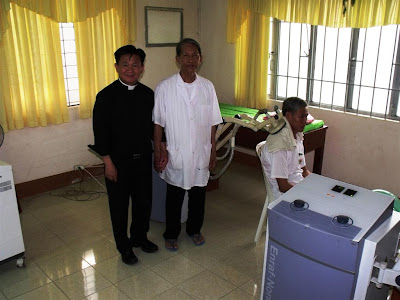 Fr. Thinh shows us the clinic in the Province of Kiên Giang. Here there are ultrasound heat treatments being offered. (At least, that is what I think was translated.) 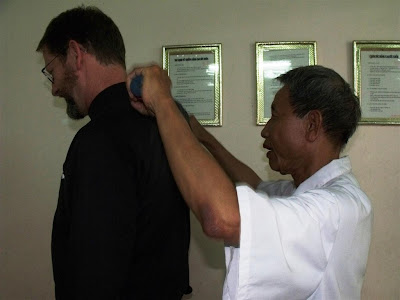 Fr. Thinh demonstrates back muscle therapy on me. It felt great! 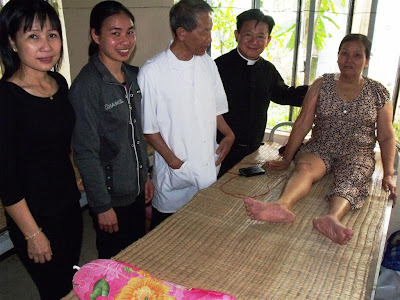 This woman is undergoing a form of acupuncture. 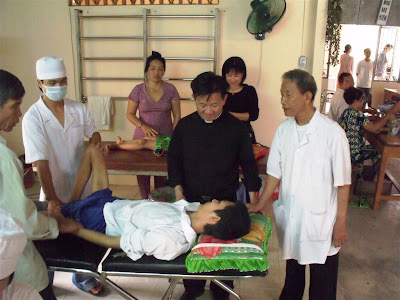 Many forms of physical therapy are being employed at this clinic. 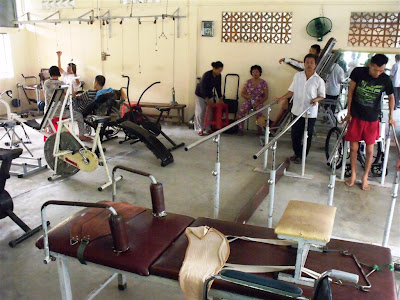 The physical therapy gym seems to be well outfitted. 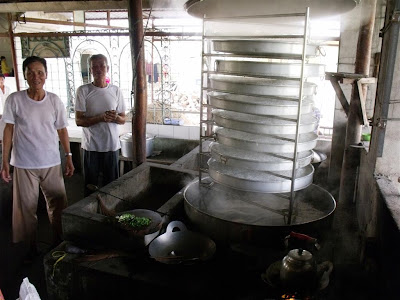 Almost all the cooks for the clinic are volunteers who provided meals with out charge for the free clinic. Here is a large, multi-tray rice steamer. 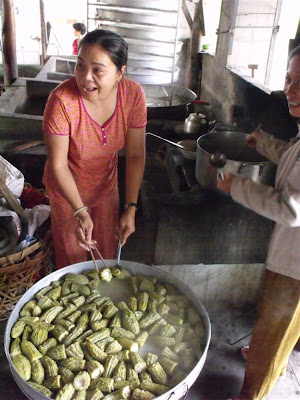 Vegetables being prepared by one of the enthusiastic volunteers. 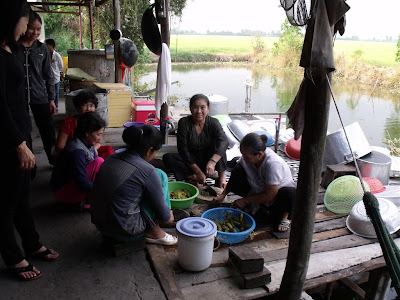 Much of cooking any meal is all the prep work. These women are slicing and dicing. In the background are very large rice fields, owned, planted and harvested by the parish for use at this hospital. 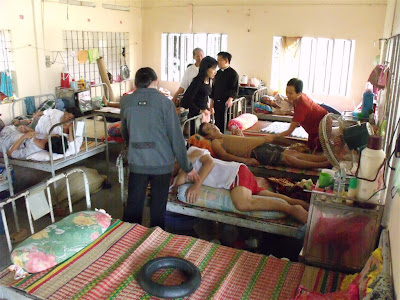 Hospital beds. By American standards, these beds may seem inadequate, but a mat on a board bed is a very common way for Vietnamese to sleep. The sisters, in some of the convents we toured, sleep on straw mats. This is just as ‘comfortable" as home for the patients. In addition, the patients are served generously and compassionately. 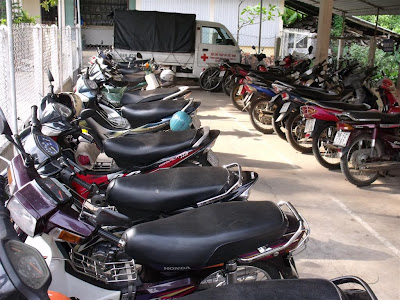 Typical parking lot in Vietnam. The truck is used rarely to transport larger amounts or items. 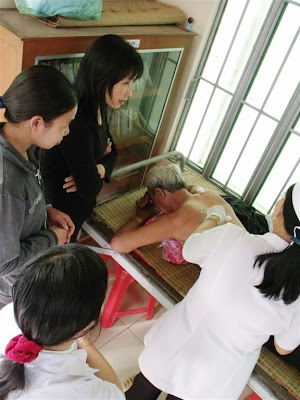 Another demonstration of a treatment that Sr. May (far left) will be learning about during her stay here. 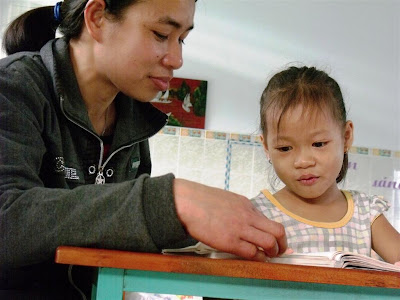 Sr. May with one of the children in the orphanage classroom. 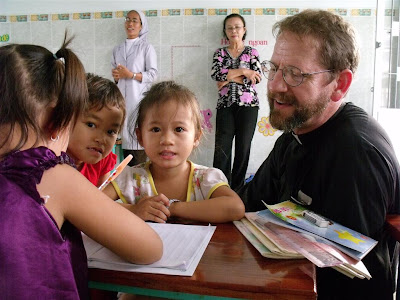 The camera is a lot more interesting than me or the school subject matter. 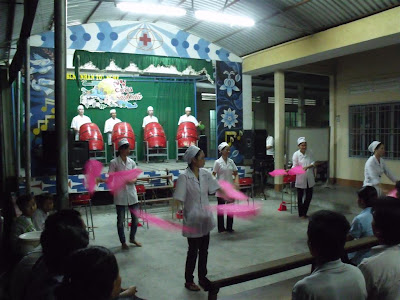 At an impromptu talent show (that Fr. Thinh only called for earlier in the day!) some of the staff perform a traditional dance with fans and drums.

Video of the Drum Dance. 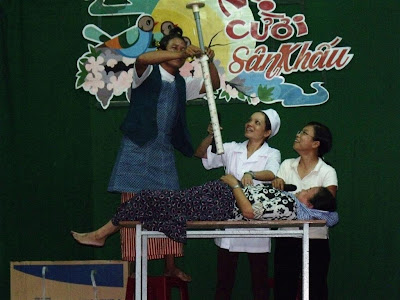 The staff (doctors and nurses) ham it up in a skit to the delight of the patients. 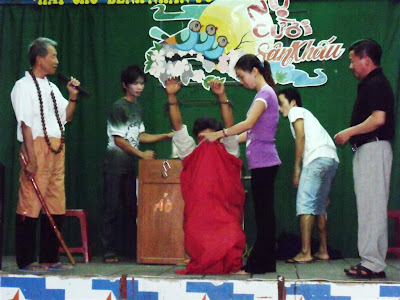 Fr. Thinh does the old "put-a-man-in-chains-tie-him-in-a-bag-lock-him-in-a-box-and-have-him-magically-trade-places-with-the-lovely-assistant" trick. He made it look easy and Fr. Bình was a volunteer in the audience who attested to the security of the chains and box. 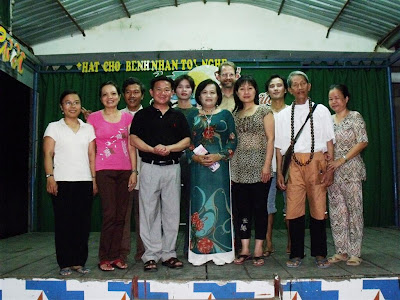 A group photo at the end of the show, after we had presented a financial gift to the hospital. The woman in the ao dai (pronounced OW-dzai, a traditional Vietnamese dress) was the Emcee of the show. She also is a physician who used to be a Buddhist nun. After working a few years at the hospital, she became a Catholic.
Posted by Bridget Becker at 7:44 AM