Cambodia takes about a day to cross. We went half-way from Ho Chi Minh City (Saigon) to Phnom Penh the first day. Then to Siem Riep the next where we stayed two nights and toured the amazing Ankor Wat (City of Temples) there. But that meant a 12-hour drive home. Actually, the drive is 10 to 14 hours varying on traffic. There are no freeways that I have seen in Vietnam or on Cambodia. For the most part, the main highway is a two lane road with busses, trucks, cars and more motorcycles than you can imagine. In Cambodia add vans with people crammed inside and then one to 4 more people on the roof.

The long stretches had house after house built on stilts along the main road. They appeared to be all small farms. During the rainy season the stilts serve their purpose, in the dry season (hot) they are tall enough for one to stand under and create a cooler living space.

The tour guide described everything in Vietnamese. Sometimes I got a good translation and sometimes, after hearing the guide ramble on for 40 minutes I would jokingly ask Fr. Binh, “Would you please repeat all of that?” And he would comply by saying, “He said we are going to stop for lunch in 20 minutes.” Fortunately, I had a good guide book that described most of what we saw so I could follow along fairly well.

There were a few other English speakers in our group who helped me. A Vietnamese-French woman from Paris (moved there with her family when she was six) who was visiting her relatives for the Lunar New Year and added this side trip to Cambodia. She had a French passport, and spoke English and Vietnamese with a French accent. There were also two children (native of Saigon) of one family. The boy (13) went to the Australian school and spoke with an Australian accent, and his sister (10) went to the American school in Saigon and spoke with a perfect American accent. In fact, we got in a joking competition about who got the curtain between our seats to block the hot sun coming through the bus window. Before I know it she said “Rock, paper, scissors. OK?” Well, after six matches I won, but, of course, I let her have the curtain anyway. Apparently, all their classes are in English and they are encouraged to speak only English all day.

Friday we leave for a 10-12 day tour of North Vietnam including a visit to the shrine of Our Lady of La Vang, a highlight for me. 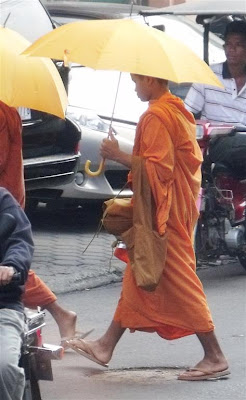 Buddhist Monks are seen everywhere in the city of Phnom Penh. They seek alms in a very gracious way.

The central market in Phnom Penh. 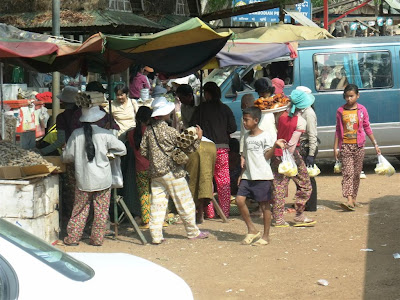 Street Vendors at a rest stop along the Cambodian Highway. 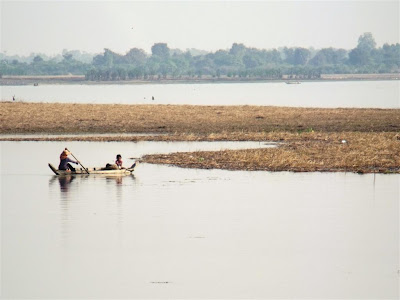 A different rest stop gave us a chance to see the Cambodian Countryside up close. 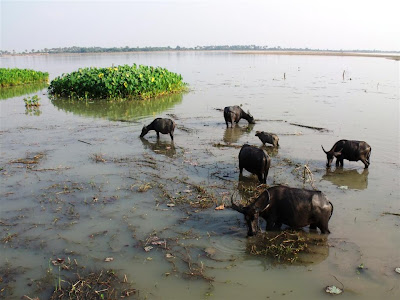 A small herd of water buffalo 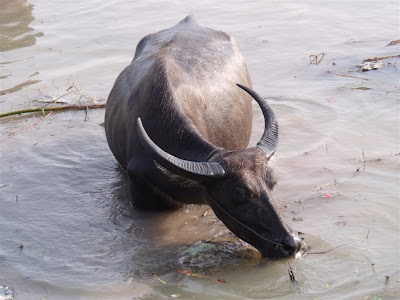 Each little farm along the road seemed to have at least one or two water buffalo. 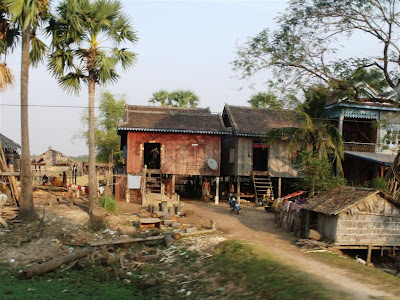 Typical houses along the highway.
Posted by Bridget Becker at 5:43 PM