Go, Green Bay Packers! I just found out on the news that Green Bay won the Super Bowl. It wasn’t much the talk here in Vietnam or Cambodia.

We left Saigon at 5:30am, Monday morning and I am now in in Phnom Penh, Cambodia. I can't believe it! Riding in a bus through the countryside from the Vietnamese border this nation on the surface looks poor, primitive and rundown. But Phnom Penh is a bustling city with moments of serenity in the temples scattered about town.

I never dreamed of being here, especially after all that this country had suffered through over 30 years of war from 1965 on: beginning with carpet bombing by the U.S. military, the genocidal killing fields by the Khmer Rouge, and the Cambodia war with communist Vietnam that toppled the ruthless dictator, Pol Pot. There are still, literally, millions of mines and unexploded ordinance hidden in the countryside (places I won’t be near). But these are rebuilding years for Cambodia and the tourist trade figures into that. So in some small way, I am contributing to the improvement of this developing nation.

We toured around the city of Phnom Penh then went to dinner and the hotel. (See pictures). Since this is a Vietnamese tour, we ate at a Vietnamese restaurant. All the talks are in Vietnamese. Fortunately, I have an English guide book that keeps me informed and the tour guide speaks a little English. Of course, Fr. Binh helps translate some.

Incidentally, other than a cold I had when I got to Vietnam (that is almost completely gone), I have enjoyed excellent health, including gastro-intestinal health (knock on wood - tap, tap). Also, I think I'm losing weight in a good way. Eating with chopsticks limits the amount of food-shoveling one can do. And, lest anyone think it’s because I am not able to feed myself with chopsticks, I have received compliments on numerous occasions from total strangers (again tonight) on how well I use chopsticks. It is just that the diet is controlled by smaller portions.

For instance, breakfast is commonly a noodle soup with a few pieces of meat in the soup and as well as fresh greens and sprouts to garnish the soup. Dinner can be a small rice bowl with numerous plates of various entrées, but you just put a few pieces of the entre on your rice (in a small rice bowl). When you eat those morsels you use your chopsticks to reach across the table from another dish (that everyone else is picking from with their chopsticks). That is the family style. A little bit of everything on the rice and then eat the rice. Then for dessert there are a host of tropical fruits to choose from, all sliced into portions that take two or three bites to consume. There are no pastries. The fruits are sweet and are quite satisfying. We'll see if I am actually lighter, but I'm told that I have thinned a little in the last week or so. At meals I leave the table, not stuffed, but satisfied. 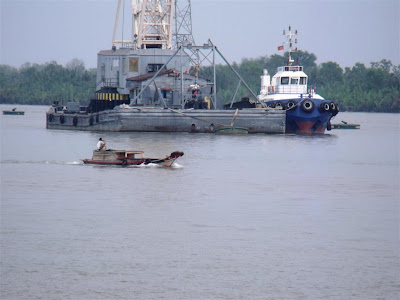 OK, this isn’t Cambodia, but a shot I took on the Saigon River the day before. All modes of transportation travel that river. 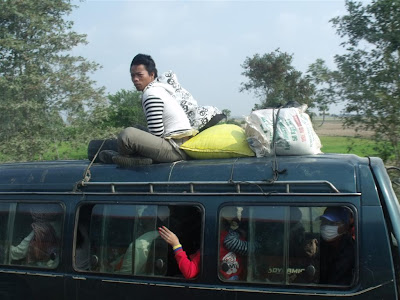 These minivan/buses charge 10,000 riel (about $2.50) to ride inside. But a mere 1000 riel (50¢) to ride on the roof. It looked very scary, but we saw a lot of these as soon as we crossed into Cambodia. And notice how many are crammed inside. No seatbelts. In Saigon in a taxi I put on my seatbelt in the back and the driver commented that in a year since he had that car, I was the first to use a seatbelt in the back. 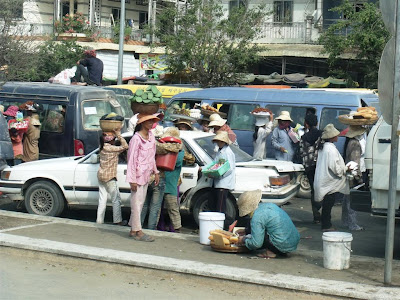 If the car stops anywhere in Cambodia the vendors and beggars show up immediately. Another sign of serious poverty. 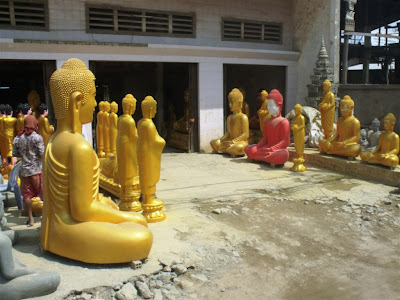 Here is where you can buy a Buddha. 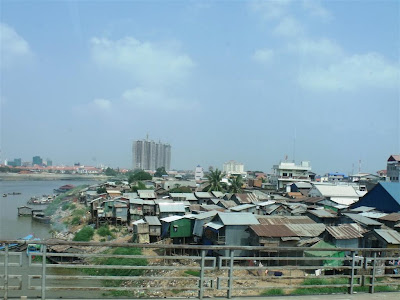 A shanty town on one side of the river entering Phnom Penh, a bustling city on the other side. 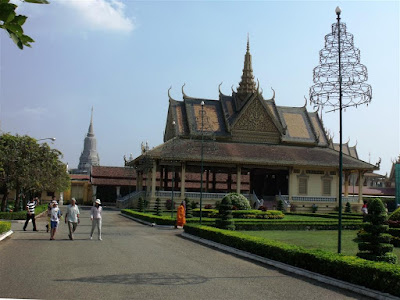 The Royal Palace Area where the King lives. 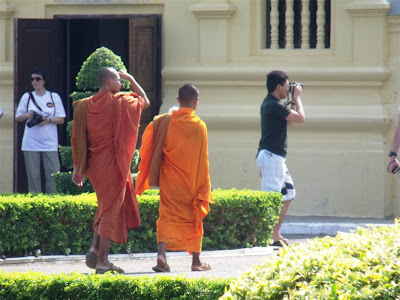 Buddhists monks are prevalent on the streets, but especially at temples. 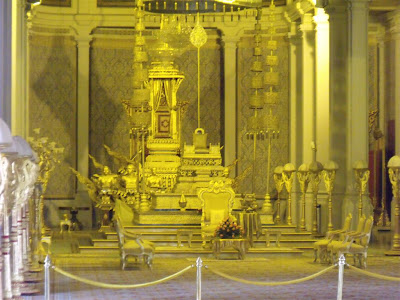 Inside the Throne Hall where the King meets with dignitaries. 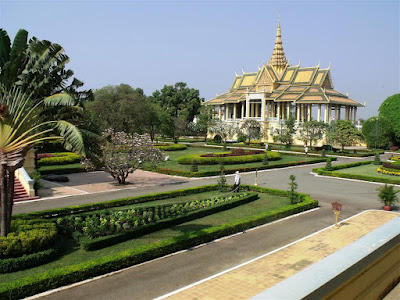 The buildings and gardens make a rich impression. 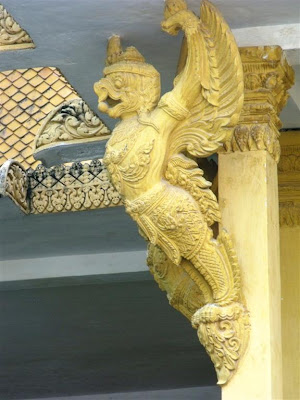 Many details mark the architecture. 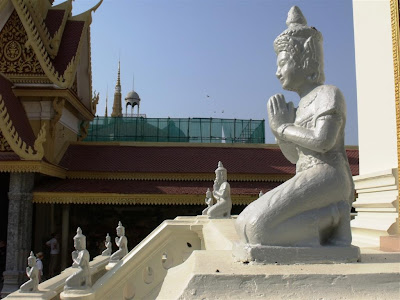 The serenity of prayer is reinforced in these statues on the hand rails near the Silver Pagoda. 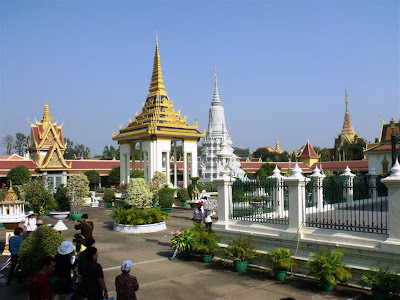 The grounds outside the silver pagoda, named so because the floor is solid silver tiles, though a bit tarnished and covered mostly with beautiful rugs. We could not take pictures inside.

A video of musicians at the Royal Palace grounds. 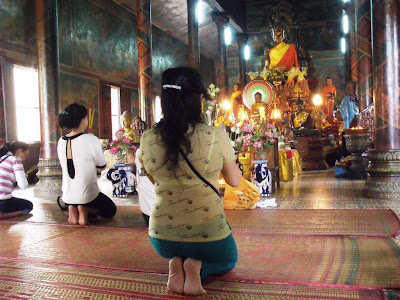 Members of our tour group (Buddhists) offered prayers at the Wat Phnom, the city’s most famous pagoda. 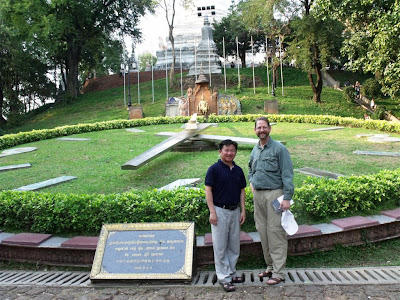 This clock was actually accurate!
Posted by Bridget Becker at 7:38 AM