Foreigners are not allowed to drive in Vietnam, therefore, the transportation for this 3-day sojourn has been by hired car. The driver of the minivan, Hung, works for a small business that Quang knows and has been an excellent tour guide.

On our way south from Da Lat to Saigon we went through the city of Bảo Lộc. Fr. Binh remembered that the Sisters Adorers of the Holy Cross of Da Lat have there motherhouse in that town. So I thought it might be worth a detour, since we both know that community from their sisters who live in Oregon. While I was the pastor of All Saints they rented the old convent and would invite me to dinner and special events. Sometimes they would just show up at my door at suppertime with a cooked meal for me.

It took some searching, but we finally found the motherhouse and met the superior general of their order. Most of the sisters were away for Tết (its like showing up unannounced on Christmas Day). But some of the sisters were there and were delighted to show us some of their charities. Though we showed up with no advance notice, we ended up spending about 2 or 3 hours with them in a very meaningful and emotional visit. (I thought: “When else am I going to be just passing through Bảo Lộc?”)

First we were invited in for hospitality of traditional New Year’s candies and something to drink. We took the car to various locations. We visited their school for the blind. Then their home for unwed mothers and orphan children.

They have a unique way of finding the young mothers who need their help. Lay people who support the sisters’ ministry, go to abortion clinics incognito. They will sit in the waiting room and strike up a conversation with the pregnant women: “When did you find out you were pregnant?” “Did you think about other options?” Then, in a non-judgmental way they will tell the pregnant women that the sisters will house and feed them through their entire pregnancy and delivery, AND raise their child. Very often, then, the pregnant mother will go with this person to the sisters’ charity to learn more about it. This scenario was repeated in the other orphanages we visited.

For those expectant mothers who go through with an abortion, the sisters ask the doctors if they could be given the aborted fetuses to give them a proper burial. Amazingly, the doctors comply. In two years the sisters have buried 2000 babies on land that was donated by a local coffee farmer. The sisters had asked if they could buy the land, but when the seller heard what it was for, he gave it to them. We prayed at that little cemetery. It was very emotional for me. Especially after holding a 3-month-old baby at the orphanage just minutes earlier.

Another story. At the orphanage we met a little girl, Thao, who looked about 12, whose mother was convinced to bring Thao to full-term in the orphanage. Thao, was born there, is being raised by the sisters, helps the sisters care for the babies, and she, herself wants to be a sister now. To think that her life was almost taken by abortion, but her mother chose another option and now the lives of these other babies are loving touched by Thao as she cares for them. This young girl who already knows that her life is a gift and is sharing that gift with others.

Then we visited the home for the elderly sisters. Fr. Binh met one of a former Superior General whom he had met some years ago when she was in Oregon to visit her sisters. Then we met a few sisters who were bed-ridden. Marty Quandt was especially moved by meeting a sister who had been bed-ridden for 10 years and is now in the late stages of Alzheimer.

One traveler in our company is Huong Nguyen, a Vietnamese woman from Portland who works with the Southeast Asian Relief Association (SARA). She has never visited their charities in Vietnam and was going to be in Vietnam at this time anyway for a family wedding. So Kim Dung, the founder of SARA, invited Huong to come to the North to visit the charities after the wedding, which was January 15. In fact, we met some of Huong’s extended family (the parents of the bride) when we stopped by their house on the outskirts of Saigon. So between the wedding and the trip north Huong will travel with Fr. Binh and I and whoever else joins our retinue. She, also, has never been to Cambodia and will join us on the group tour we signed up for. Before that, we will go to Vũng Tàu to meet more of her family, about an hour out of Saigon by hydroplane south at the mouth of the Saigon River. 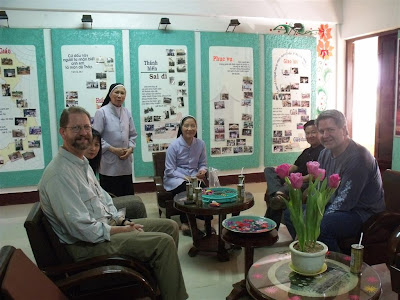 The Mother General of the Vietnamese Sisters Adorers of the Holy Cross of Da Lat and one of the other sisters showed us hospitality. 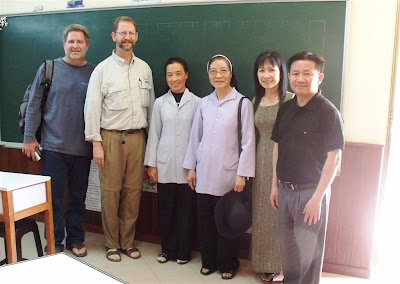 Touring the school for the hearing impaired. 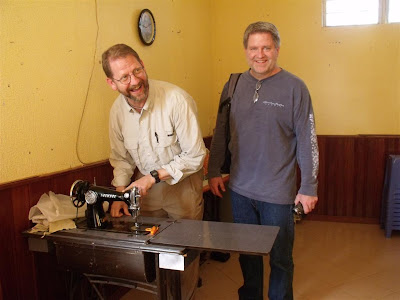 One of the classes they teach to the hearing impaired students is sewing. The basics can be taught on any sewing machine. But this machine is quite old. It looked older than the one my mom used when I was a boy. But this American made product was still working! 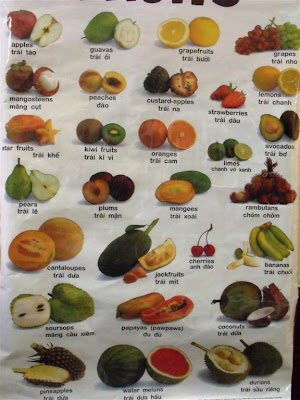 A poster with pictures of tropical fruits and their names in English and Vietnamese. Now, this is something I can use! I have grown especially fond of jackfruit. When a flavor for chewing gum is called “tropical fruit”, this is the flavor they try to imitate. 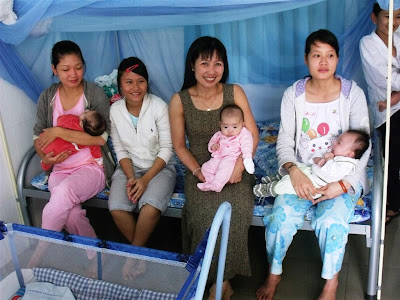 The expectant, unwed mothers help care for the babies in the orphanage where they may choose to have their children reared. The woman sitting center-right is Huong Nguyen, who works for SARA and is with us on this trip. She was already in Vietnam for a niece’s January wedding. The girl sitting center-left was born in this orphanage, helps care for the babies, and wants to be a sister some day. 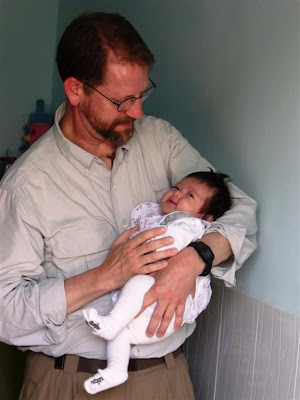 Few things are more delightful than holding a baby. This is a three-month-old who has a home, the precious gift of life, and is loved at this orphanage. 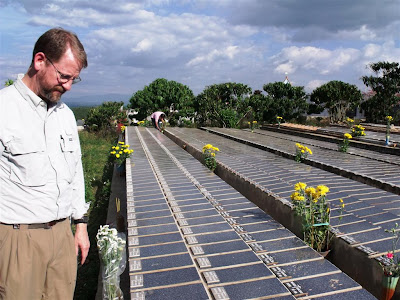 The sisters have friends who discreetly go to abortion clinics to talk expectant mothers into staying in the sister’s care during their pregnancy and keeping their children, or letting the sisters raise their baby. But for those babies who are aborted, the sisters ask the clinic doctors to let them bury the tiny infants on donated land. This cemetery holds 2000 aborted children from the last two years. Our driver is placing incense sticks around, a Vietnamese custom for honoring the dead. Fr. Binh greets one former Superior General of the Order who he had met when she visited Portland one time. 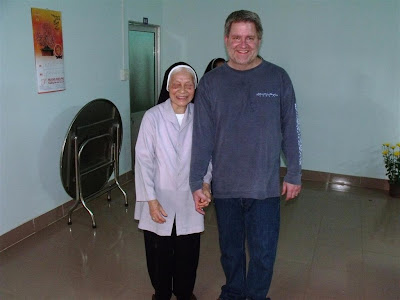 Marty Quandt finds a new friend in one of the elderly sisters who could not stop smiling around him. 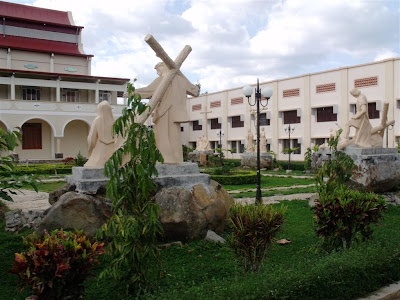 Life-sized stations of the Cross are outside the church here at the motherhouse in Bảo Lộc, as we have seen in numerous locations.
Posted by Bridget Becker at 10:02 AM